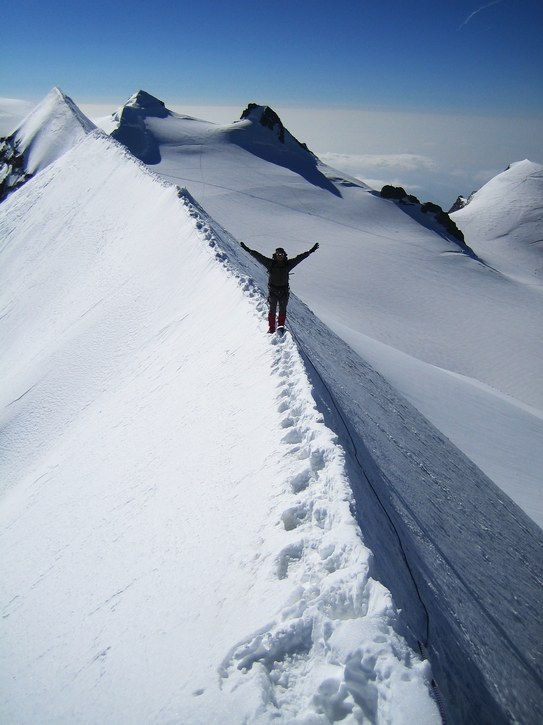 Lyskamm (or Liskamm) is an impressive double-peak in the southern Monte Rosa group on the border between Italy and Switzerland.

The traverse of Lyskamm is one of the famous ridge traverses in the Alps and was to be the highlight of our climbing trip. We planned to ascend Lyskamm East summit (4527 m) from Lysjoch, then to traverse to Lyskamm West summit (4479 m), which is about 1 km away, and finally to descend to Felikjoch. We chose this direction because the ascend of Lyskamm East is rated at AD- whereas the ascend of Lyskamm West is rated a bit easier at PD+. The whole traverse is rated at PD+/AD- if there is a spur and at AD if there is none. The climbing by itself is not very difficult. What's challenging is that the ridge is about 5km long and that the route goes directly on or slightly below the narrow snow ridge. Lyskamm is famous for its big cornices. In some years, cornices build up to both sides of the ridge, making laying out a spur very difficult. It's because of these cornices that the mountain got a bad reputation and used to be called "men eater". Apparently, during the first years of climbing Lyskamm, some people stepped through cornices and fell off the mountain. According to the guide books, these cornices pose less of a problem nowadays. Why? Apparently because of better knowledge, better equipment, and global warming. 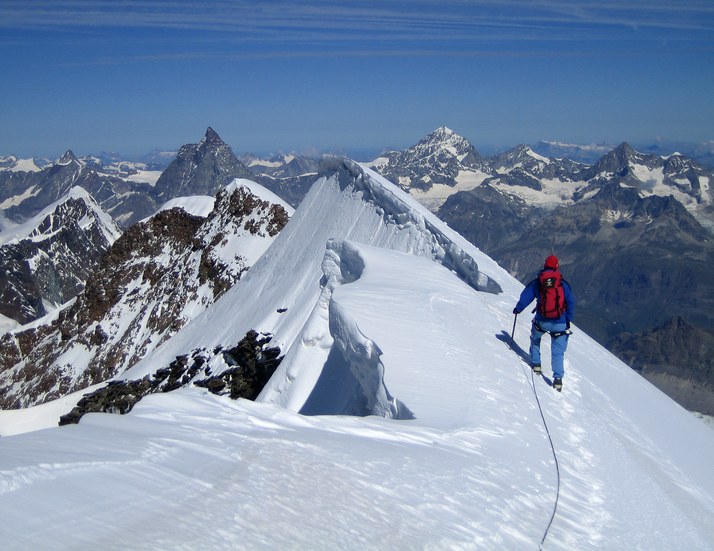 We started at the Rifugio Regina Margherita at 7:15am. Then we descended the Signalkuppe to Lysjoch. At 8:15am we started the ascend to the east ridge of Lyskamm. After a few switchbacks we reached the ridge on which we would stay for the rest of the traverse. There was a spur that we had already seen the day before and, luckily for us, the strong wind had died down. The weather was gorgeous and the snow was good: We had perfect conditions!

The first part of the ridge is nearly level and extremely narrow. In some parts there was not even enough space for our ice axes to touch the ground and we had to carefully place one foot in front of the other. At that point I wasn't sure what the hell I was doing up there instead of sitting in an armchair at home and reading a book... On the south side, the mountain drops just a few hundred meters onto unwelcoming rock outcroppings. And its rocky and icy north face drops over 1000m down to the Grenzgletscher glacier. So falling down on either side of the ridge was not an option. Some people don't rope up at all in order to avoid pulling down their rope partners in case of a fall. Well, we weren't ready for that and instead chose to rope up on a long rope. The idea was that in case of a fall there would be enough time for somebody else to jump on the other side. I'm not sure how reliable this method is though... For me at least it felt better than no rope at all. 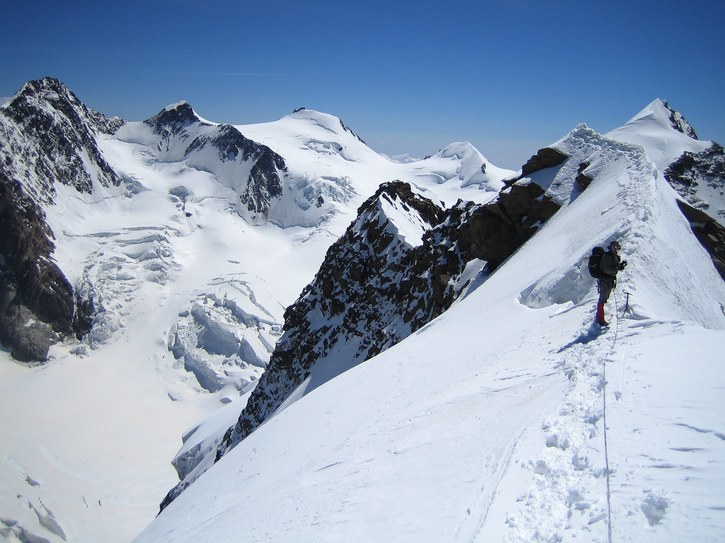 After that extremely narrow part the ridge widens a bit but also gets steeper as one is approaching the east summit of Lyskamm. When we arrived there at 10am we were a bit worried about the upcoming traverse to the west summit since the guide books call this the crux. When we continued it turned out, however, that the worst was behind us. It didn't get easy but it got easier. The ridge wasn't that narrow anymore and we also got used to the exposure. There was a part of about 30m where we had to traverse on the north side below the ridge and it got very icy. There we protected by placing a few ice screws but soon the going got better again. It was also here, at the short icy part, where we met to only people during the whole trip: 2 guided rope teams of 4 and 5. We suggested to them to pass each other at a place more suitable for passing. Instead, all 3 parties ended up passed each other at the only icy stretch of the 5km long ridge. It's that kind of inconsiderate behavior that I keep seeing with mountain guides in the Alps over and over again.

Just before reaching the west summit there are some rocky outcroppings to climb over (II). On the west summit (11:45am) we enjoyed the views that where laid out before us once again. For me, especially awe-inspiring was the Matterhorn (4478 m) which we where looking down at! A short descend over some rocks and a steep snow field brought us down to Felikjoch. 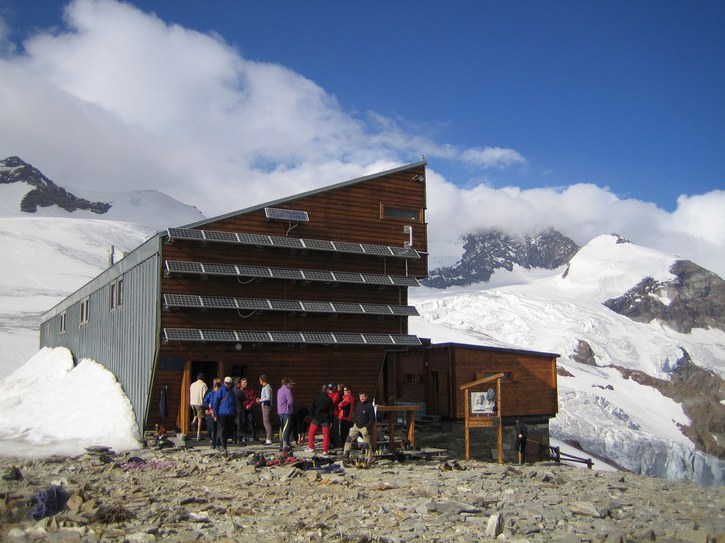 Since it was still fairly early in the day and we where up at Felikjoch anyway we decided to continue and climb Castor (4226 m) en passant. After Lyskamm, the summit ridge of Castor (PD-) appeared very wide and unexposed, even a bit boring. At the summit, we enjoyed the views once again and canceled lingering ideas about tagging Pollux (4092 m) too. Instead we called it a (pretty successful) day and headed back to Felikjoch from which we descended to the Rifugio Quintino Sella. The snow had gotten very soft which made for ugly and exhausting post holing. At 4pm we reached the hut.

The next morning we had a long breakfast before we packed our stuff and headed down a rocky ridge to a cable car which brought us back to Gressoney la Trinite. Then we were off to the Dauphine to climb Barre des Ecrins.

This was a great trip in a great region of the Alps. The mountains are high and the huts too which enabled us not only unusually late starts in the morning but also to climb multiple 4000er peaks per day. All in all we climbed 9 such peaks. The traverse of Lyskamm was the highlight of the trip without a doubt.