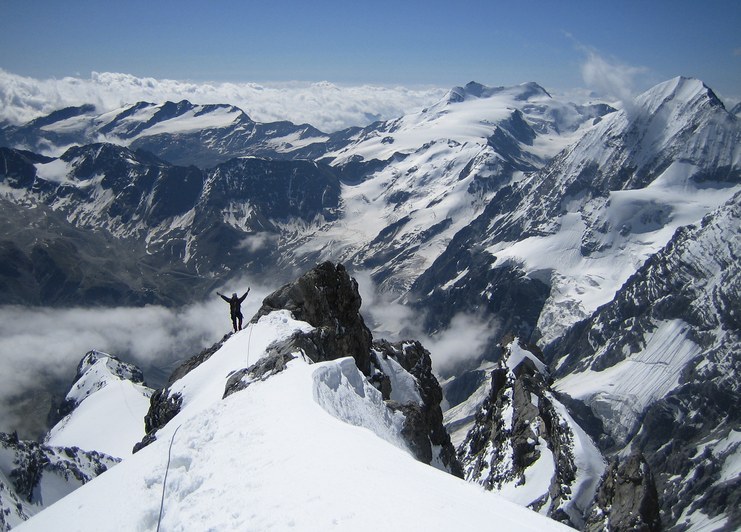 Claus-Dieter and I climbed Ortler (3905 m, 12811 ft), the highest peak in Southern Tyrol (Italy), via the famous Hintergrat ridge. The Hintergrat is a fairly exposed ridge that ascends the mountain from the east. It is a very scenic and popular route that is a bit more difficult than the normal route. I had been itchy to climb it since I returned to Europe and when the weather forecast looked good and the Hintergrat hut had opened for the season Claus-Dieter and I gave it a go.

Hike to the Hintergrat hut

We left Munich around 9am on Saturday morning for the 4,5 hour drive to Sulden in northern Italy. Claus-Dieter had wanted to leave even earlier to take in the scenery at the Hintergrat hut but I had been flown in from London the night before and was pretty tired. After arriving in Sulden (1846 m) we parked the car at the Langenstein lift. Since the lift wouldn't start running for the summer season until the next day we took on the opportunity to conquer the mountain in style without cheating. After hiking through some forest to get to an ugly ski area we traversed south where we soon reach the Hintergrat hut at 2661 m. The hut had opened for the season the day before and quite a few climbers had already arrived. We liked the hut a lot. The sleeping areas are very comfortable, there are no bunk beds as is custom in most huts in the Alps, instead there are regular two story beds with clean linen. We had a hearty dinner and chatted with a bunch of German students who were planning to pitch their tents higher up the mountain for an early morning start. 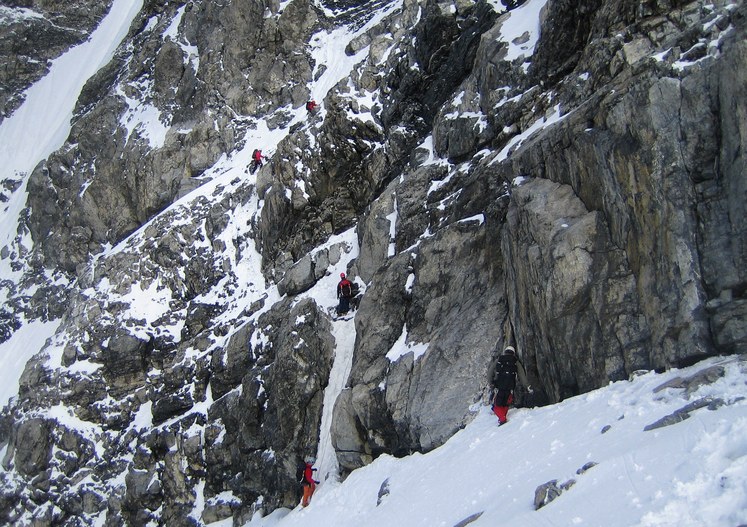 At 3:30 the caretaker woke everybody by knocking at the door. To our surprise the other 6 people in our room had already left! A bit puzzled we went down to the dining room for breakfast. The place was full of people preparing for the climb of Hintergrat. Since I had invested 7 Euros for a breakfast we decided to not participate in the crazy race up the mountain but instead to wait and see and enjoy the breakfast. Apparently, people were worried about traffic high up on the ridge where it is difficult to pass slower climbers and traffic jams are common. Since we had witnessed such craziness on Barre des Ecrins a year ago, we decided to take it easy. We left the hut at 4:15 as the very last party behind about 40-50 people.

The first part of the climb consists of a long and rather boring stretch of hiking through scree and up a boulder field to gain the ridge crest. Just before getting there one has to ascend a narrow chute. Here we were nearly got hit by rocks that were knocked off by some parties high above and came raining down on us. 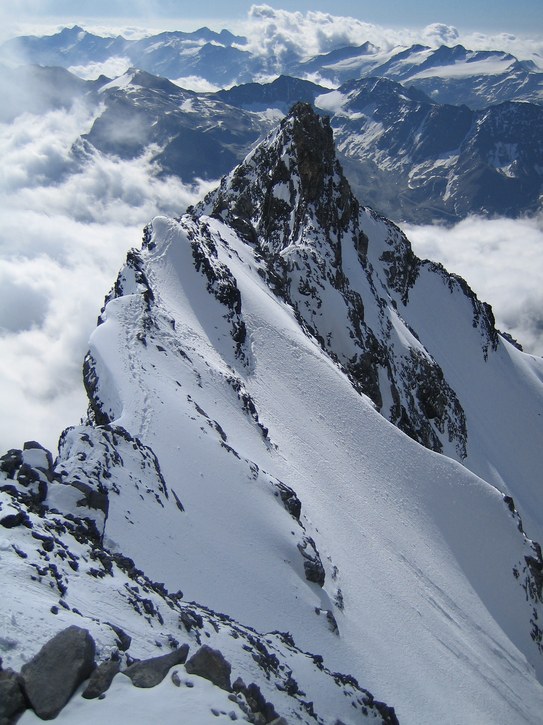 At 6:30 we entered the ridge by reaching the "Oberer Knott", a wide snow shoulder. The sun had risen and the neighboring mountains Königspitze (Grand Zebru, 3851 m) and Monte Zebru (3740 m) were beautifully lit. Snow conditions were good and we didn't need crampons. After traversing the first snow field we entered rocky sections. The climbing mostly is about UIAA II-III with a UIAA IV crux move up a crack. Since there was still snow on the ridge it was possible to traverse around the crux on the southern side of the ridge which we and most people did. Some day I will come back and do it the proper way...

Due to our extensive breakfast back in the hut, there was nobody behind us. We had passed a few slower parties earlier and they were very far behind us now. We had the ridge to ourselves! The views were stunning: Königspitze, Monte Zebru, and Monte Cevedale (3769 m). Further south we could see the southern Ortler alps with Pizzo Tresero (3594 m) and San Matteo (3678 m) that we had climbed two years ago. Since the valleys were filled with clouds only the high peaks stuck out, most notably Weisskugel (3738 m) and the Bernina Group.

We reached the summit around 10:45am. Only four other climber were there among them a party that had ascended the northeast ridge (Marltgrat). We chatted with them and one of them, a mountain guide, helped us identify many of the surrounding peaks. After a few minutes they left and we had the summit to ourselves. When Claus-Dieter climbed Ortler via the normal way a few years ago, he had encountered hordes of people and now he was pleased with the solitude. We took some photos but the fierce winds soon suggested heading down. The winds had blown over the spur of the normal way and we had some difficulties finding our way on the glacier (Oberer Ortlerfernerupper) but soon where back on the well traveled spur. 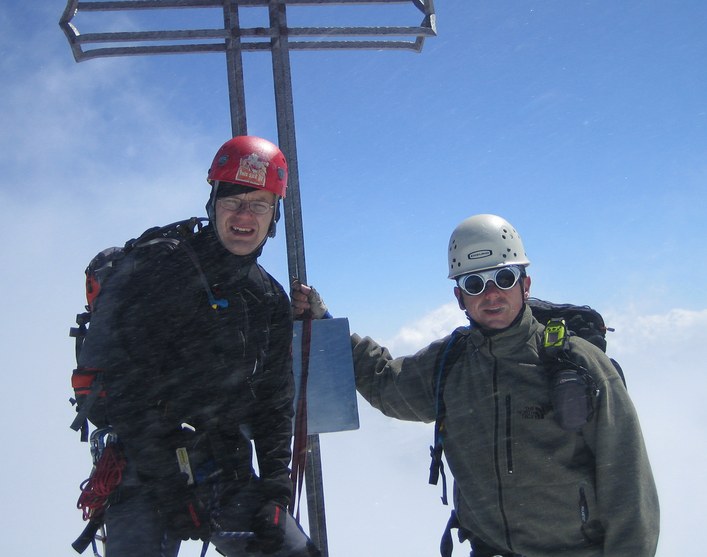 The descend was much more demanding than I had expected. First, there was a steep and icy step to overcome, the so-called "Bärenloch" just after passing the Lombardi bivouac (3316 m). In addition, the snow had gotten pretty soft in the warm sun which made walking difficult. After leaving the glacier there was a section of rather exposed UIAA II-III ridge climbing and a short rappel. This in itself was not a problem but there was quite a traffic jam that brought us to a halt for a while. There was an exciting moment when an Italian climber slipped on icy rocks and fell a few meters down a chute. His fall was stopped when people who were in the vicinity quickly grabbed the rope and jumped over to the other side of the ridge to stop the fall. Further down, there was another steep section which was equipped with metal chains.

After lots of ups and downs we were pretty exhausted and finally reached the Payer hut (3029 m) around 3:45pm. But there was no time to loose: At the hut we found out that the lift, which was not running the day before, had just opened for the summer season and was running until 5pm. So we downed some Apfelschorle to rehydrate and hurried down the mountain. Passing the Tabaretta hut (2556 m) we reached the lift a quarter to 5pm and were glad to be able to shortcut the last section back to the car.

We reached Munich at 9pm after 1,5 great days of climbing. The Ortler is called "König Ortler" ("King Ortler") for a reason: It's a big mountain that shouldn't be underestimated as even the normal way is not easy. But both the great climbing on the Hintergrat ridge as well as the spectacular scenery make me want to come back for more.