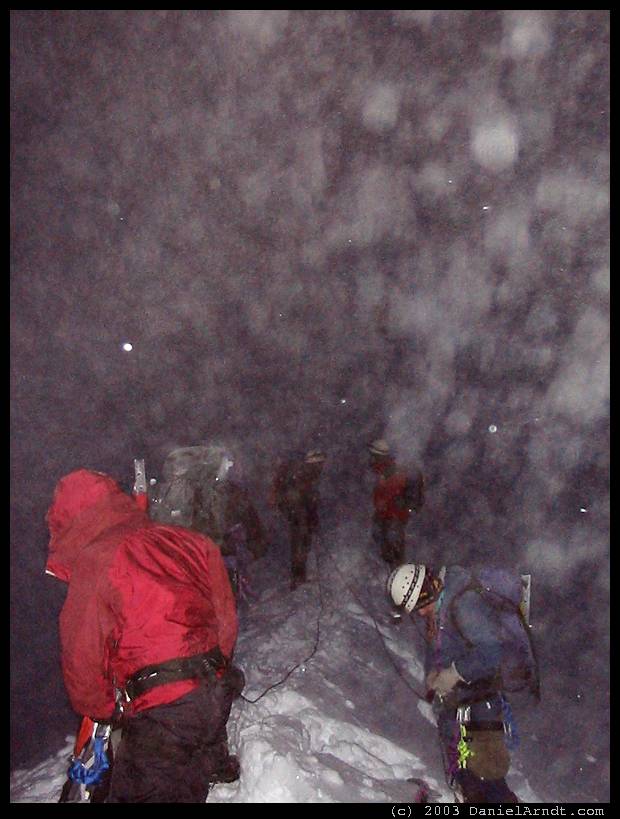 Mount Hood was on my todo-list for quite some time and so I was happy to get on this climb with the Seattle Mountaineers May 1-2. Left the UW campus at 6.30pm on Thursday to meet Cindy, another UW student, to drive down to Timberline Lodge, a ride of about 4-5 hours. There we arrived at 11pm to meet the other members of the party, some of whom had wisely spend some hours in the parking lot trying to get some sleep.

We took off at midnight and made good progress along the right side of the ski area. It was a clear night and the view of the stars was quite impressive. As there was a new moon it was really dark and the mountain nowhere to be seen. At first I suspected some kind of setup but a black starless patch ahead of us gave some confidence that something big must be blocking the view - most likely Mount Hood.

We put on crampons somewhere above the top of Palmer lift and headed towards Crater Rock. Walking was really nice, there were good boottracks most of the time. As we passed the fumaroles of Devil's Kitchen it started to smell pretty badly like old volcano and one of those now so popular SARS masks would have been quite handy. Anyway, we made it to the Hogsback without passing out to take a break and rope up for the final summit push. The bergschrund is already starting to open up but it was easily bypassed on the left side. While going up the 2-3 switchbacks to the Pearly Gates the sun had risen over the horizon and I got distracted marveling at that huge cone-like shadow of Mount Hood (that looked much more impressive than the actual mountain seen from Timberline). However, having that prime spot in the middle of the rope, a fast climber ahead and a slower one behind me, I was quickly reminded that there was a job to do. The snow in the steeper section through the Pearly Gates was pretty soft already and so we reached the summit quickly. The view was gorgeous: Mt Jefferson and the Three Sisters to the south, Adams St. Helens, and Rainier to the north. There probably aren't many mountains with such views far into both, Washington and Oregon. The way back with more great views was uneventful and we arrived at Timberline Lodge around 9.30am. 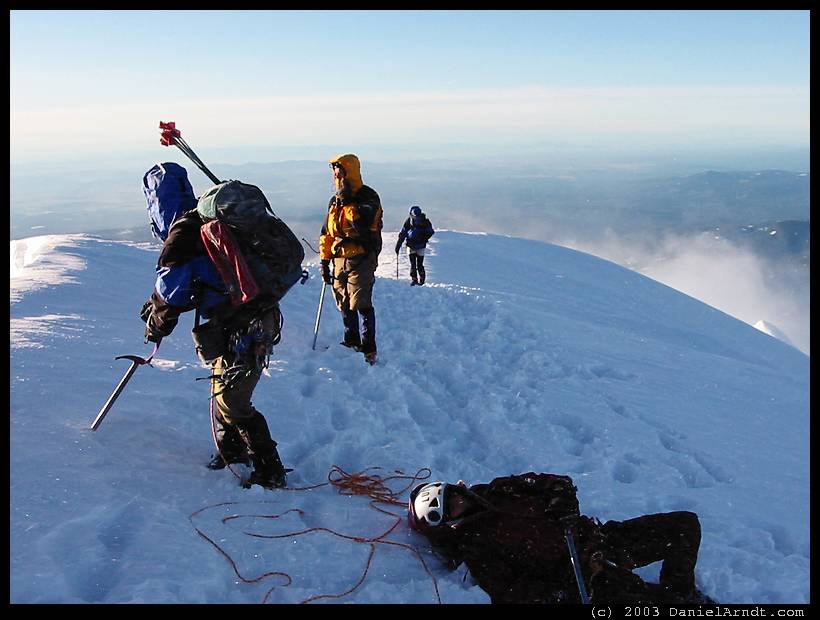 Caught a ride back to Seattle and arrived there at 3pm ready to hit the office. But sleep hit faster and so that part of the plan didn't quite work out.

Unfortunately, two members of our party had to turn back shortly after we took off because they didn't feel well. The rest of us (8 people) had a very good time. This is a great and fairly easy glacier climb and I can really recommend it.

This was a Basic Climb by the Seattle Mountaineers with a party of eight led by Rob Brown.

Update: Check out another climb of Mount Hood I did in 2005.