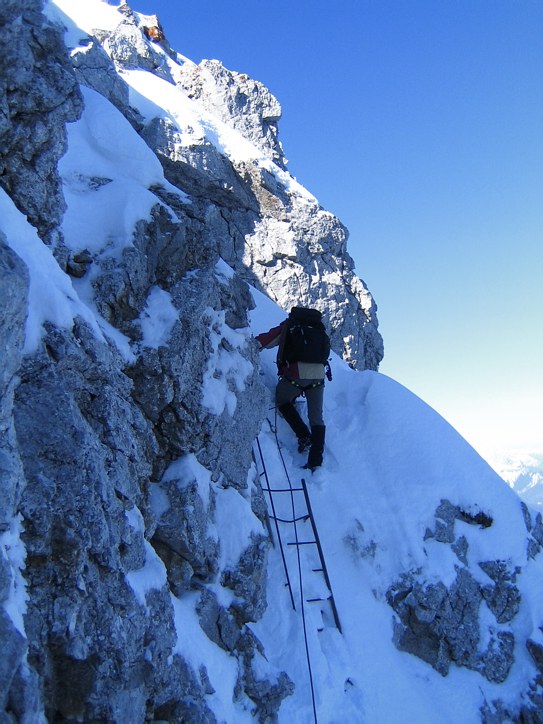 We had tried to do the Mittenwalder Klettersteig (Via ferrata) a few weeks ago, but back then too much powder snow was covering the route and we didn't get very far. Last weekend, however, the route was melted out more and Claus-Dieter and I gave it another try. We had also heard that some guys had done it a week earlier and therefore we knew that it was doable.

We arrived at the Karwendelbahn cable car in Mittenwald at 8:30 in the morning but learned that they wouldn't open until 9am and so we had enough time to gather our gear. After we took the first gondola up the mountain to the Karwendelgrube we went to the start of the Klettersteig. The weather was gorgeous with blue skies and a crystal clear view due to the "Föhn" (foehn wind). The weather outlook was stable with pretty much the same conditions forecasted for the next day. Although we didn't plan on spending the night out this was good news anyway. Since it was so early in the season many of the steal cables that are installed along the Klettersteig so people can clip in for protection and many of the ladders were still covered with snow. Therefore we had taken a 60m rope as well as a few slings and nuts along. Unfortunately, I had forgotten to bring a picket which would have been very useful. 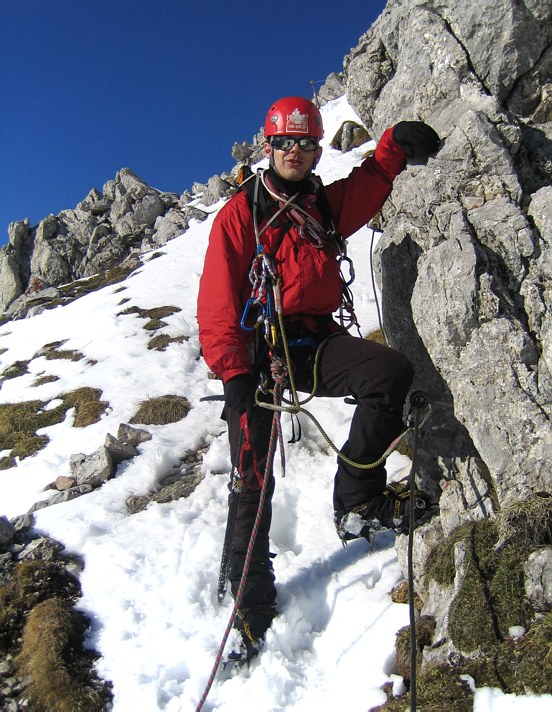 After putting on crampons and harnesses we started climbing at 9:45am. There was a well established boot track from the guys who did the route a week ago that we followed. We made good progress although we were pretty slow because we belayed quite a few sections. After crossing over Nördliche Linderspitze (2327 m, 7635 ft) and Mittlere Linderspitze we arrived at Südliche Linderspitze (2303 m, 7558 ft) where we had an extended lunch break. The views were gorgeous with the Wettersteingebirge and the Zugspitze, Germany's highest mountain) to the west. Just when we were about to continue, another rope team of 3 caught up with us. After a short chat we continued until we reached a saddle, the Gamsanger (2180 m, 7152 ft), which we thought was the end of the Klettersteig. For a while, we looked for a trail or at least foot prints down but didn't see any. So finally we brought out the map and were pretty stunned when we discovered that we were not at the end but rather at about the middle point of the whole route with the most difficult part yet to come. So the choices were: to finish the route as planned, to return the way we came or to try to find a way down into the valley from where we were, which wasn't really an option. Since it had taken us nearly 5 hours to reach this point it would take us at least another five hours to finish the route. So suddenly, time had become an issue. After assessing our options we decided to continue and finish the route as planned. We had the necessary gear to spend the night out if need be and we knew that the weather wouldn't be a problem. The other rope team returned at this point because they only had a 25m rope, much too short for belaying the traverses ahead.

The next section was a series of rather long traverse along steep mountain sides (55-60 degrees). The avalanche warning level was very low so we weren't concerned about that danger too much. For the most part the snow was firm, but sometimes is was very fluffy and unstable. Since most steal cables very buried, finding anchors was hard and we had to use a few questionable nut placements in the rock. We also wrestled with the 60m rope that could have been at least 10 m longer... When we were past the difficult traverses we were pretty happy but it had taken us a long time. To finish the route before darkness we sacrificed a bit on safety by simulclimbing either using running belays or unbelayed. The route had gotten easier but it was still very exposed as it followed the narrow ridge with big drop-offs on both sides. So we used the well known "if-the-other-guy-falls-jump-down-the-opposite-side" method of belaying. Well, nobody fell and we reached the end of the route (near the "Tiroler Hütte" hut, which is closed this time of the year) by 8pm, just when the sun was setting behind the Wettersteingebirge. 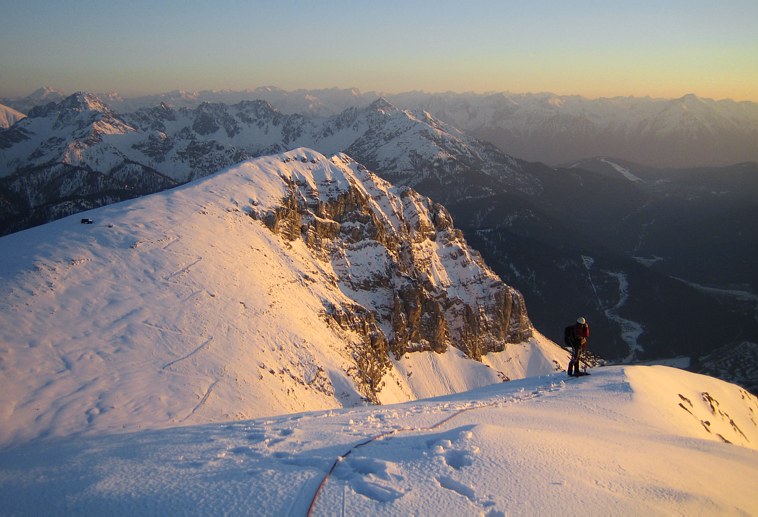 We put on head lamps and followed the hiking trail that passes by the Brunnsteinhütte hut and continues down to Mittenwald. Since the trail was snow covered it was difficult to follow. It would disappear frequently and then reappear. It was around 10pm when the trail had disappeared again and we were unable to relocate it. Lacking a better alternative, we followed some foot steps going downhill. Soon the foot steps went into brush and we ended up postholing through ugly scrub with no trail in sight anywhere. Suddenly, we saw some lights and it turned out that we were pretty close to the Brunnsteinhütte hut. This was great because we hadn't expected anybody to be there that early in the season at all. Now we hoped that whoever was there wouldn't go to bed early and turn off the lights so we wouldn't loose our bearing. We postholed our way through this mess toward the hut but just got ourselves deeper and deeper into the forest. Also, the terrain got steeper and steeper. Our head lights illuminated the brush close by, but behind this it was pitch black. Worried about maneuvering ourselves into a dead end, we were just discussing to spend the night out and to continue in daylight when we heard somebody calling from the hut. We called back and two people with flashlight came to meet us and lead us out of this jungle. 10 min later we were on save ground on the trail which must have been something like 50 feet downhill from where we were. And another 20 min later we were sitting in the hut and enjoying some well-deserved rustic bavarian dinner: bred, sausage and beer. By 11pm -- after we where assured that the trail from the hut down into the valley was pretty much melted out and was very easy to follow -- we started to head down. We arrived at the car by 1am and back in Munich by 2:30am. 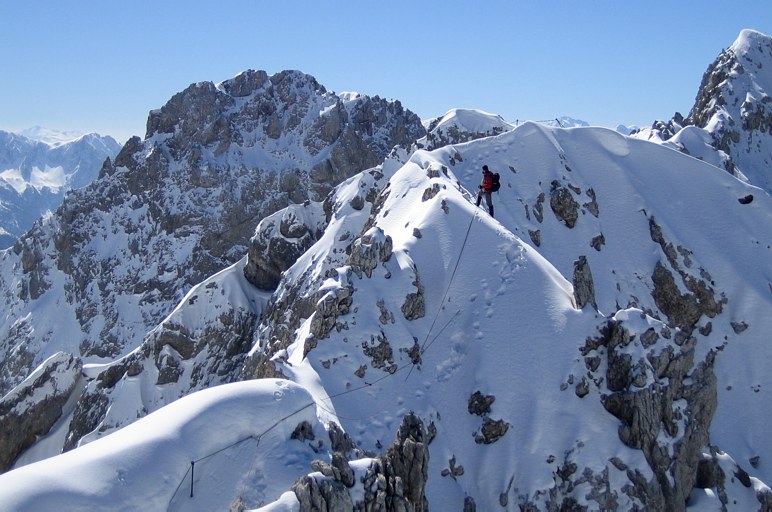 It turned out that our two "rescuers" had followed our head lights as we were coming down the trail. When they went outside to have a smoke they noticed that we had stopped moving. This incident might just change my opinion about smokers in the mountains... However, the same two guys had also ventured up to the pass earlier that day (admittedly under the influence of alcohol) and got lost on the way down, thereby producing the very foot steps that we had blindly followed into the scrub...