The Summit of the Jungfrau 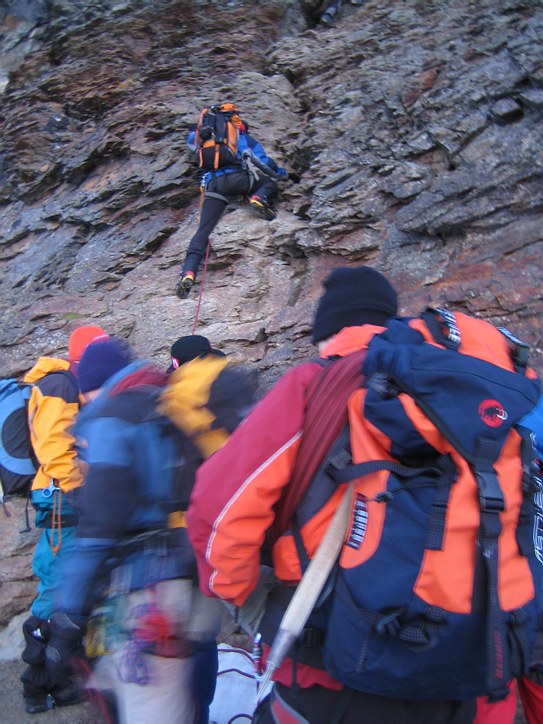 The next morning we got up at 4am, had an hour-long breakfast, and at 5am we were on our way toward the Jungfrau (4158 m). First we returned to the Jungfraujoch where we had arrived the day before. There we roped up and then traversed over the Jungfraufirn toward the eastern end of the Kranzbergegg (3506 m), a rocky outcropping that leads to the south east ridge of the Jungfrau. We where pretty late and most of the other number of climbing parties where ahead of us and just one behind us. Getting to the top of the Kranzbergegg involves ascending a short icy chute and some easy grade II scrambling. Once on top, the path easily continues on snow toward the southeast ridge. To gain the ridge we had to cross a bergschrund which didn't pose a problem. From there on the path winds mostly along the snowy ridge line and the views were getting more and more spectacular the higher we went. Just below the summit, at a fairly exposed place, a guide and his client passed us. They had been close behind us and not tried to pass when there was more space which made us a bit angry. After exchanging a few angry words (I still have to get used to that kind of encounter that seems normal in the Alps) we continued toward the summit which we reach at 8.30am.

The 360 degrees panorama from the Jungfrau were awesome: Eiger and Mönch are close by, the buildings at the Jungfraujoch clearly visible. Below, there lies the huge 23 km long Aletschgletscher. The sky was clear and we had great visibility. We probably spent close to an hour on the summit before we headed down. Although we could have chosen the same way over the Kranzbergegg, we followed a spur that went down from the Rottalsattel directly to the Jungfraufirn. We had to cross a few dicey snow bridges and walk around a few crevasses but the route was passable. It actually used to be the normal route, but in recent years it got more and more difficult to cross the crevasses there and so people now usually choose the way that we came up. 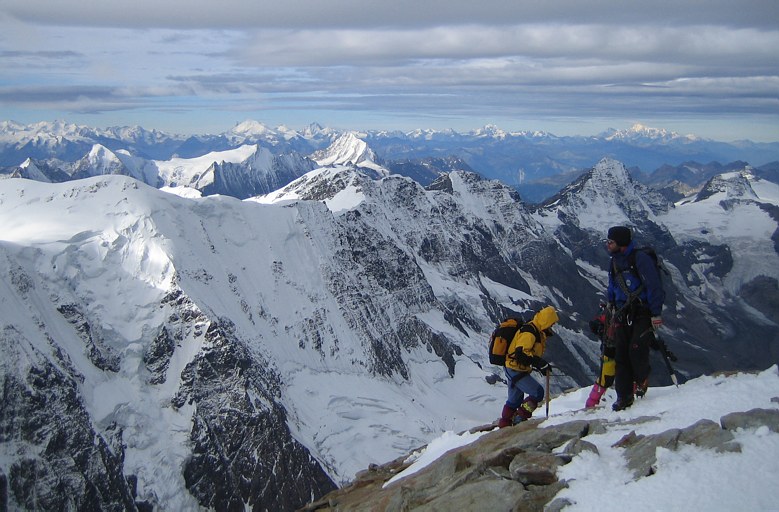 At 11.30am we were back at the Jungfraujoch, directly at the "Ice Gateway" which is a door where tourists can exit the building and "experience" the snow. It seemed that about 90% of all tourists are Asian, mainly from China. The reason might be, that the Jungfraujoch is Europe's highest altitude train station and markets itself as the "Top of Europe". And that's why it is a destination in these "See Europe in 10 days" trips. We actually had a lot of fun with the tourists, posing for and with them and getting our picture taken a few times. At one point I started charging one Euro per photo and was surprised that people where actually willing to pay. Generously, I declined the money...

This was a great trip and an easy way to get on top of one of the Alps 4000m peaks. Having the advantage of starting at 3500m comes with a hefty price tag though and one should consider spending a few days in the region and doing more than just one climb. An even easier climb is the southeast ridge of the Mönch, which Claus-Dieter was actually considering to do in the afternoon. However, the weather worsened and this plan got shattered... 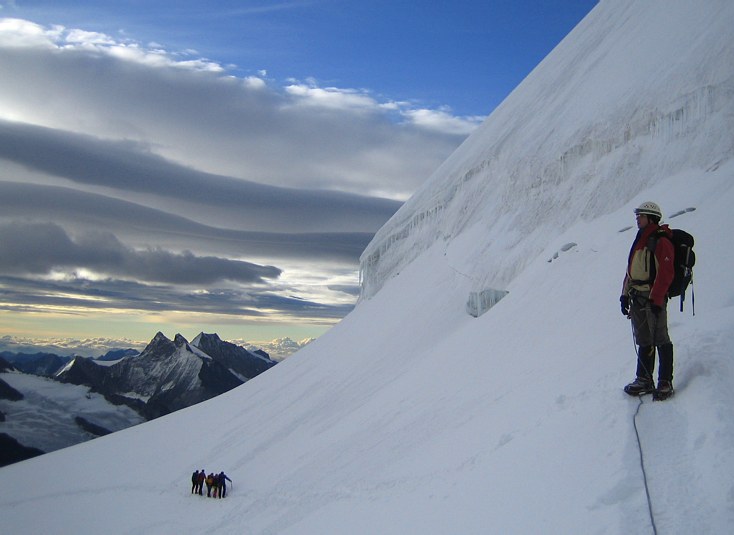 It is pretty remarkable how much has been built at the Jungfraujoch at an altitude of 3500 m. The whole complex hosts restaurants, souvenir shops, and research facilities. For example, it was here in 1982 that the presence of high energy solar neutrons in the Earth’s atmosphere was proven for the first time. Truly a great place to visit for a physicist! Building a train line that goes mostly through tunnels is a great feat too, especially considering that it was opened in 1912.

In the early afternoon we took the train back down to Grindelwald where it had started to rain. We packed our stuff and took off for Courmayeur where we had planned to climb Mont Blanc.

On the way we stopped for a late lunch at a restaurant. After arriving in Chamonix we headed for the entrance to the Mont Blanc tunnel. After paying 30 Euros we crossed the tunnel and arrived in Courmayeur. Here, the plan was to stay at a hotel overnight in order to have some comfortable accommodation and to take a shower before spending the coming days on Mont Blanc. However, we had made this plan without the Italians: As this Monday was a national holiday in the midst of the holiday season, each and every hotel in Courmayeur was booked and we were sent further and further down the road toward the town of Aosta. Well, we didn't find a hotel along the road and none in Aosta. Our search was helped by my car's navigational system that stores addresses and telephone numbers of many hotel, but we didn't succeed. The only exception was a tiny room for 200 Euros... At this point it had gotten pretty late, about 10pm, and we gave up. Instead we looked for a quite village, parked the car, and spent the night in it.